“In Yosemite Valley, one morning about two o’clock I was aroused by an earthquake; and though I had never before enjoyed a storm of this sort, the strange, wild thrilling motion and rumbling could not be mistaken, and I ran out of my cabin, near the Sentinel Rock, both glad and frightened, shouting, “A noble earthquake!” feeling sure I was going to learn something”, John Muir, great American naturalist, writing about his feeling the  March 26, 1872, Owens Valley earthquake.

There is nothing more exciting to a seismologist than to feel the ground shaking during an earthquake.  The sense that the Earth is alive, that geology is dynamic, and for a brief moment in time it is possible to actually “see” tall mountains rise and deep valleys sink is palpable.  Alas, even seismologists rarely experience a large earthquake first hand – although there are 10-20 magnitude 7+ earthquakes annually, only a very few are located near population centers.  Seismologists mostly reside in the dingy halls of academic institutions, or worse yet, within the sterile offices of government agencies (first hand experience). It is only with great serendipity that seismologists have the happy happenstance to be standing on the ground above a suddenly slipping fault.  That “slip” is the breaking of rock caused by the accumulation of strain driven by the ceaseless movement within the Earth’s plates.  A small amount of the energy “released” by the rock breaking is converted to seismic waves that travel through the Earth.  The quote at the top of the article is from John Muir, and was his emotional response to feeling a large earthquake in Owens Valley 100 km from his cabin.  Muir’s words capture the pure joy seismologists feel when they recognize the vibrations from an earthquake.

Flying south from Santiago towards Chiloe early on Christmas eve, 2016.  The view is to the east, along the drainage of Laguna del Maule.  The fold and thrust belt of the central Andes is outlined by the low fog; parallel sub-ranges trending north-south.  I instrumented the Valley for a structural study in 1999.  Just beneath the plane is the epicenter of the 2010 magnitude 8.3 earthquake!

My wife and I planned a trip to visit southern most Chile to celebrate our anniversary over Christmas break.  The highlight of the trip was a visit to Patagonia (which is a subject of the article “Collisions at the Bottom of the World II), and trekking within Torres del Paine national park. I worked on various seismic experiments within Chile in the 1990s, but I never had the opportunity to visit Patagonia; I love the high Andes of central and northern Chile (along with Bolivia and Argentina), but pined for the “Blue Towers” at the very end of South America.

The long planned anniversary trip started not the most auspiciously—plane mechanical issues and gross incompetence by American Airlines meant we missed our plane to Santiago not once, but TWICE;  we arrived in Santiago on the evening of the 24th instead of the planned morning of December 22.  Finally, on Christmas Eve we made it to Chiloe, a beautiful island at the northern end of the Chiloe Archipelago. We were to stay a few days at an absolutely spectacular hotel, Tierra Chiloe (http://www.tierrahotels.com/tierra-chilo-hotel-boutique/). We planned for some trekking on the island mostly to see something unique culturally.  Earthquakes never crossed my mind, although that probably is a remarkable confession!  Early Christmas morning we arranged to trek on the Pacific Coast —and at the very beginning of our trek we got, oh so, oh so very close to the John Muir feeling of the “noble earthquake”.

Location of Chiloe Island, southern Chile. Included is the bathymetry west of the Chilean coast.  The tectonics of South America are dominated by the subduction of the Nazca Plate beneath the South American Plate.  The spreading center is obvious from the bathymetry – spreading segments oriented mostly north-south separating Nazca and the Pacific plate.  The bottom of the figure shows the end of the Nazca and the beginning of the Antarctic Plate.

Chile: Home of the Monster Earthquake

The entire coast line of Chile—all 2500+ miles of it from the border with Peru to the overlook into the Drake Passage, is a convergent boundary.  Mostly this convergent boundary is between the oceanic Nazca plate and the continental land mass of South America on the South American Plate.  The Nazca and South America are converging at a rate on the order of 10 cm/yr, and the Nazca plate disappears beneath Chile in a subduction zone.  This subduction gives rise to volcanoes, and the uplift of the Andes; it also makes Chile one of the most seismically active regions in the world.  In fact, Chile has seem more magnitude 8 earthquakes in the last 150 years than all other countries combined.

However, the subduction along the length of Chile is complicated by the oblique angle between the South American coastline and the Nazca-Pacific spreading direction.  In the north, the coastline is 1000s of km from the spreading center, but near Chiloe the spreading center is only a few hundreds of km from the coast.  The ocean crust of the Nazca plate is very young when it descends beneath Chiloe, and very old when it subducts beneath Iquique near Peru.  The young crust is very warm and therefore buoyant, thus it resists descending through the mantle.  This buoyancy translates to a very “stiff” subduction zone, and very large earthquakes.

The fault areas of mega earthquakes in southern Chile.  The largest earthquake known is the May 22, Chilean earthquake that ruptured a fault nearly 1000 km from north to south. (figure from Berkeley Seismo Lab)

In fact, the largest earthquake known occurred along the southern section of the Chilean subduction zone on May 22, 1960.  The figure above shows the area that slipped in that earthquake (the pink color).  The earthquake ruptured a fault that started in the north (the epicenter of the earthquake) and moved to the south almost 1000 km.  The fault had a maximum slip of about 25 m – an extraordinary number! A single earthquake moved one side of the fault almost 100 feet relative to the opposite side. This earthquake created a huge tsunami that traveled across the Pacific ocean and caused fatalities in Hawaii and Japan. 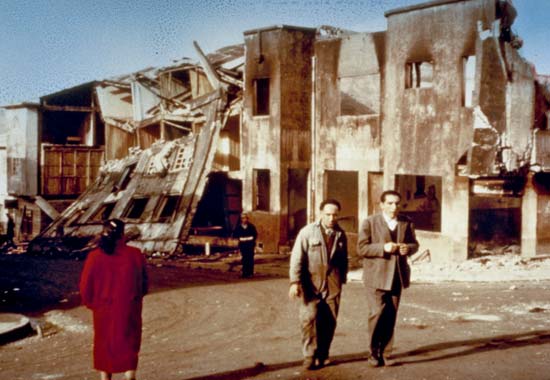 Damage to Castro, the capital of Chiloe after the 1960 earthquake.  Castro is located about 5 miles as the crow files from my hotel.

Seismologists measure the size of earthquakes with seismic moment, which is defined as Mo = u D A.  This simple formula states that moment (Mo) is the product of the fault slip (D), fault area (A) and the rigidity (u) of the fault (think of this as the strength of the rock that slips along the fault surface during an earthquake).  The long age of the Nazca plate translates to a large value for rigidity.  It is possible to convert seismic moment to a value of magnitude – which is not particularly useful to seismologists, but is very important to the public because of their familiarity with Richter’s magnitude.  For the 1960 earthquake the magnitude is calculated to be 9.6, by far the largest earthquake ever.  A careful examination of the map of the Chilean earthquake fault zone above will show that the very center of the fault is …. Chiloe!

The large size of the 1960 earthquake obviously causes every resident of Chiloe to treat terremotos with concern.  However, it is possible to calculate the average “return time” for the 1960 event by comparing convergence rate and slip in the event.  This return rate is about 300 years.  This means it is unlikely to have another monster earthquake (M > 9.0) near Chiloe in the next few decades; but it also means that great earthquakes (M>8.0) are going to happen every 50 years or so, and large earthquakes (M>7.0) every few decades.  In other words, when I made our plans for visiting Chiloe I should have AT LEAST THOUGHT about earthquakes! 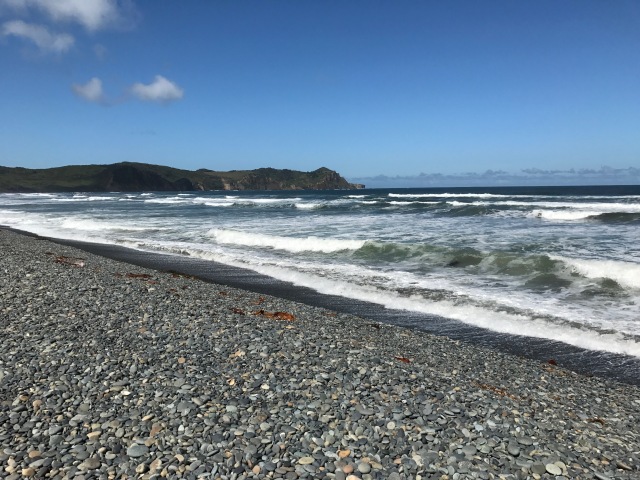 Looking south towards Mueller de las Almas moments before the magnitude 7.6 earthquake.  The bar is about 8 m high and was once exploited as a placer deposit.

Missed it by that Much!

We started our Christmas day trek with a drive to the west coast of the Chiloe Island about 8:45 am.  Around 11:15 we made a stop near Cucoa on our way to Muelle de las Almas.  The stop was at a remarkable pebble bar that broke the surf. The bar is about 8 m high, and 30 m wide, and with every surge of the surf, the pebbles are pulled seaward causing a loud clacking.  The bar was once a site of a placer operation that recovered meager amounts of gold.  We were on a tight schedule or I would have explored the bar for much longer.  However, we got back into our 4WD vehicle and headed for the trailhead.  Within minutes of getting into the car we noticed that the power poles were swaying—the wires between poles looked to be moving 3 or more meters.  My first thought was where the heck did those hurricane force winds come from?  Within another few minutes we had started our trek and my phone went crazy with emergency notifications.  At first I thought they were from New Mexico, but closer examination, it became obvious that they where Chilean, and warned that a large earthquake had just occurred and a Tsunami warning was issued.  Soon, our guide was being called on his radio, and told to evacuate immediately.  A quick search showed that the USGS had reported a magnitude 7.7 (later downgraded to 7.6) earthquake under the southern tip of Chiloe – only 45 km south of us! 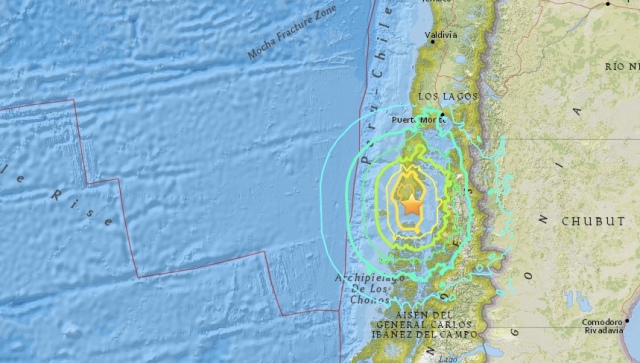 Isoseismal Map from the Chiloe earthquake (USGS).  The contours show regions of similar shaking. The earthquake was felt about 250 km away from the epicenter.

My strong inclination was to continue the trek and wait on a high ridge to see a tsunami come ashore.  However, I was over ruled by the guide (for the record, Michelle was voting with me – wait for the frick’in waves!). There were numerous reports of landslide, and within 30 minutes there were reports of 20 homes destroyed at Puerto Quellon.  Discretion once again trumped valor — we abandon the trek and headed back to the hotel.  Along the road we encountered numerous landslides, and cracked roads and bridges. 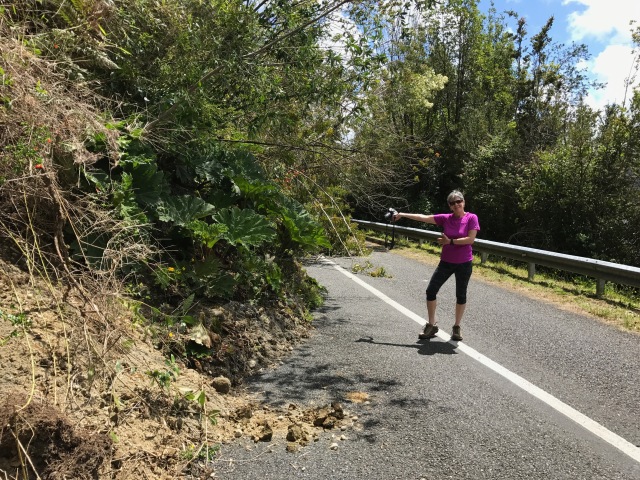 Michelle showing one of many landslides covering the road back from the coast.  This particular slide nearly closed the road…but we squeezed through.

The earthquake knocked out power to the entire island, and broke water pipes up to 80 km from the epicenter.  When we got back to Castro there were lines of cars trying to fill up with gasoline – scores of cars at each station.  The lack of power and the concern of future earthquakes caused a mini-panic.  I don’t mean to give the impression of chaos, just concern driven by the haunting memory of 1960.

In the end, we ended up with a cancelled trek, a quiet afternoon looking for birds instead of interesting rocks, and thoughts about if we had only waited 10 minutes on the gravel bar we would have experience shaking with an intensity of 6 or 7.  Instead, we had the soft rubber of tires and the suspension system of a truck to damp out the shaking…missed it by oh so little.

There remains a remote chance that this earthquake is a foreshock to a large earthquake.  But it seems unlikely.  However, it is still a great anniversary present to an old seismologist on vacation.